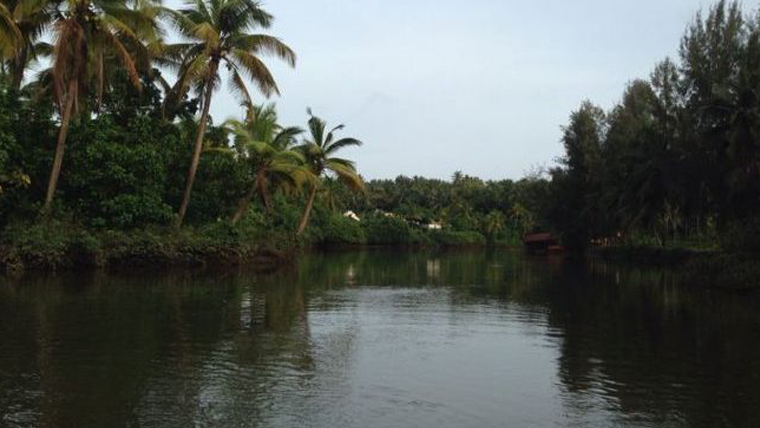 For the August 15th weekend, we chose to travel within India. After a short early morning flight from Mumbai, we landed in Managalore, a little after 10:00 am. A hotel car was waiting to drive us to Bekal, a small town on the shores of north Kerala , a state in South India. The drive from Mangalore airport to Kasaragod district, where the Taj Vivanta Bekal is located, was quite picturesque with vast expanses of coconut trees and river crossings. Kasaragod is bounded by the Western ghats in the east and the Arabian sea in the west and has twelve rivers flowing across its terrain. On account of extensive road work, our drive stretched on for an extra 30 minutes, but we did not complain as we let our eyes soak in the local surroundings. 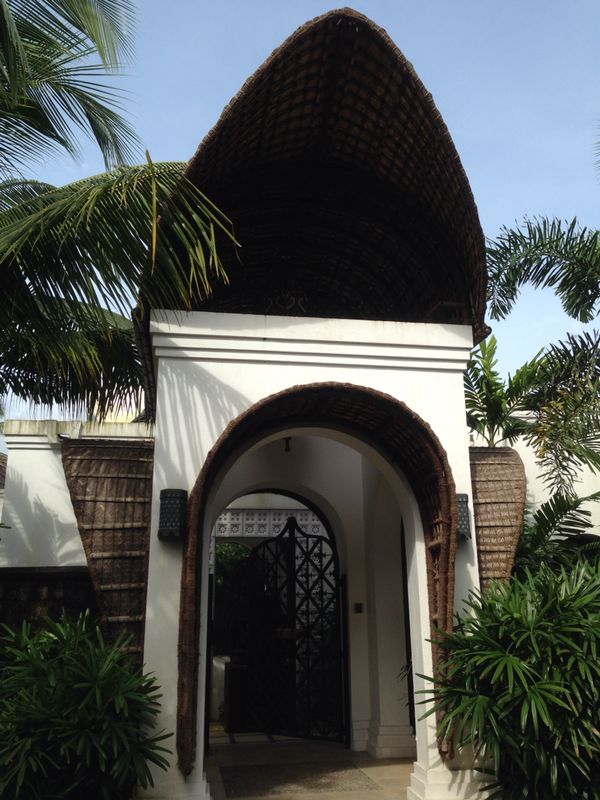 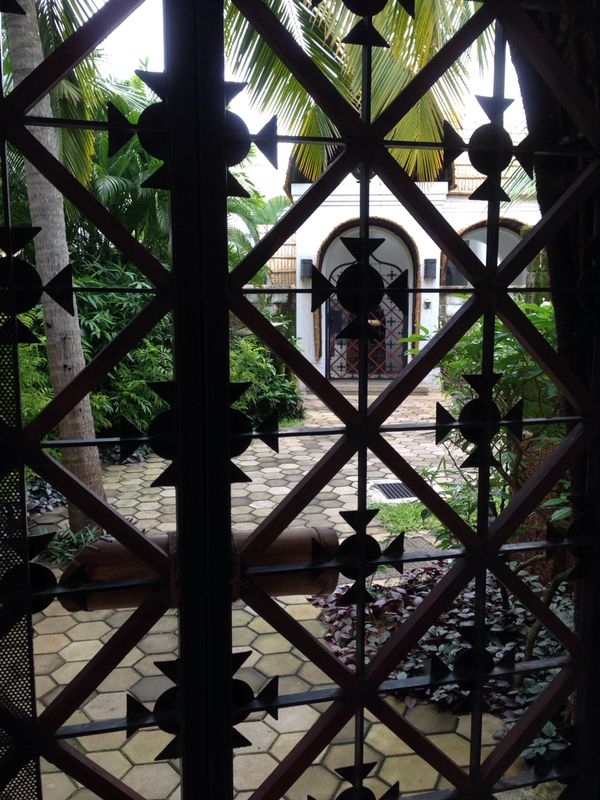 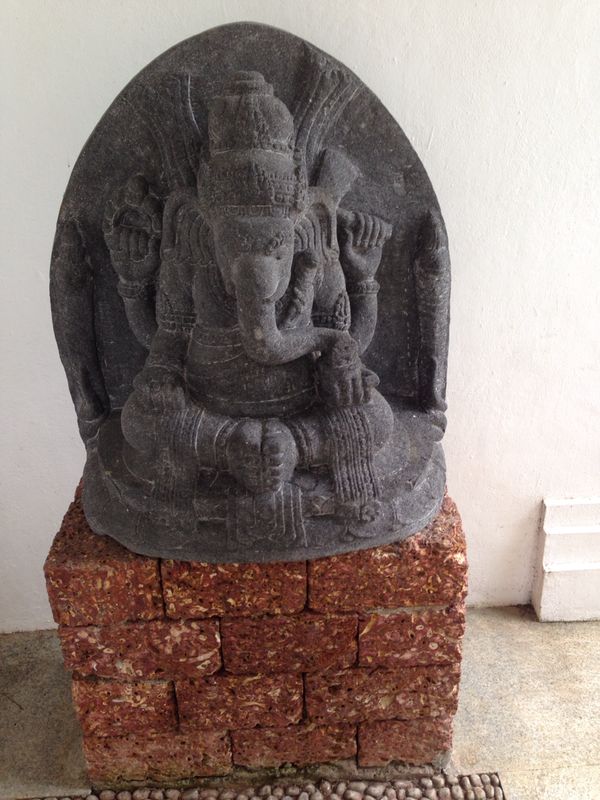 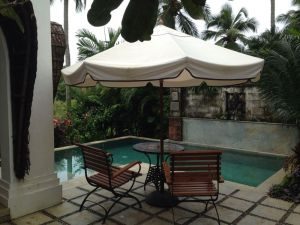 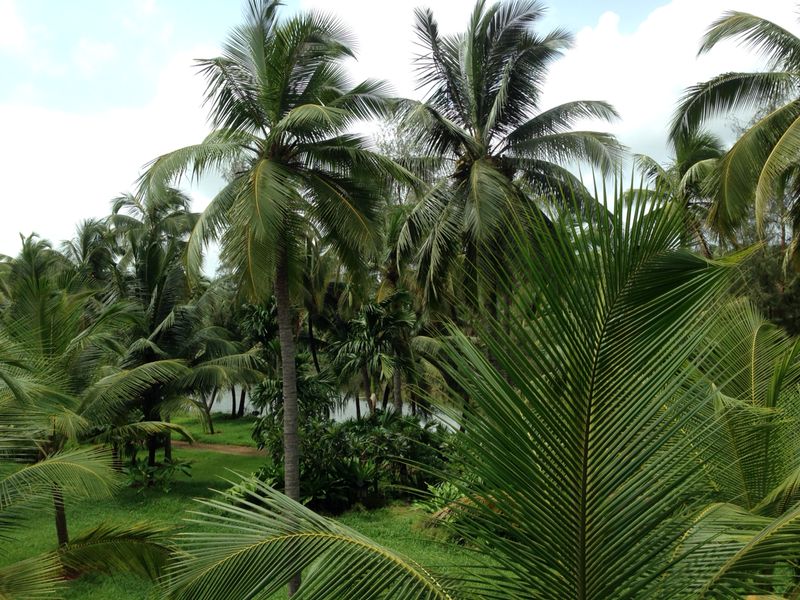 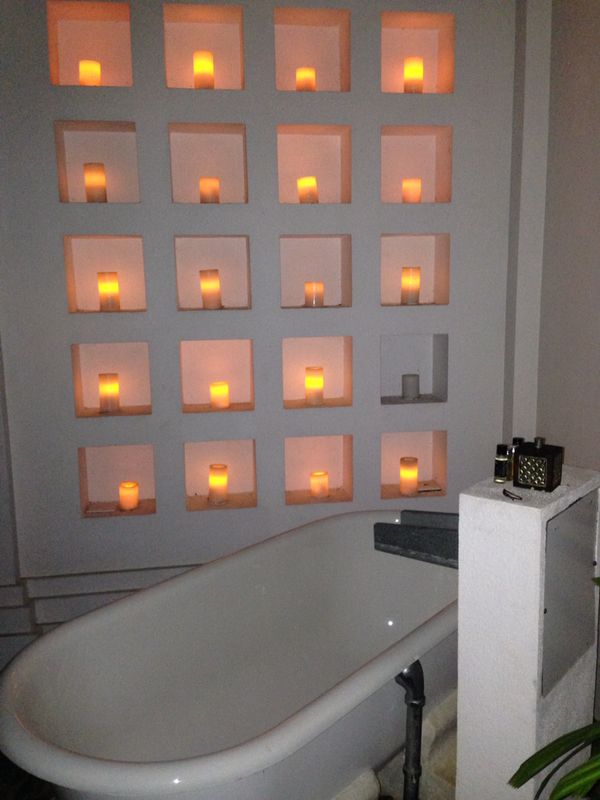 After a two and a half hour long journey we arrived at the gates of the Taj Vivanta Bekal. Waiting at the Lobby to greet us was the General Manager Mr. Samir Khanna and the front office manager Mr. Abhishek Sachdev. Following an introduction to the property from both gentlemen, we were soon shown to our villa, architecturally inspired by the Kettuvallam rice boats. As we walked past the intricate iron gate, a stone statue of the elephant God Ganesh welcomed us into our home for the next four days. The villa has it’s own private pool and is located in a quiet part of the lush 26 acre property, with views of the garden and the languorously flowing Kappil river. A walk through the private courtyard brings you to to the soak tub on your left, in front of which is a wall with 24 electric candles. Behind you is an open air rain shower area with all the forest essential products laid neatly out. We had a swing bed and an outdoor dining area right near the pool from where we could hear the waves of the Arabian sea lash onto the sandy Kappil beach.

After settling in, we headed to Latitude for a late lunch.We asked about the beach restaurant, 'By the Bay' which our dear friends Anil and Pooja Kapur had recommended. We were told that due to strong gusts of monsoon winds and the proximity of the restaurant to the beach, the restaurant was shut during the rainy season. So Latitude it was and we instantly hit it off with Saurabh Rana, the assistant restaurant manager, an individual with a very affable and likeable personality. He came across as committed to please and eagerly recommended an adventurous array of regional specials. Tawa Masala Fish with some Meen Kudumpulli curry was his pick for for us for lunch. Served with fresh crispy hot Appams, we were in culinary heaven. Since plans that afternoon were to laze by the palm fringed tranquil back waters of beautiful Bekal, we feasted. 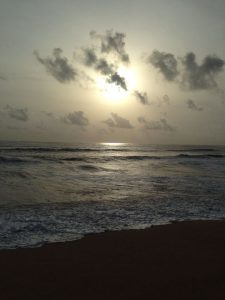 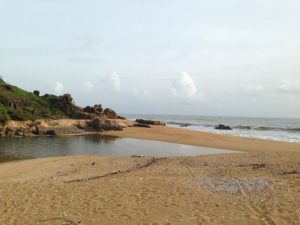 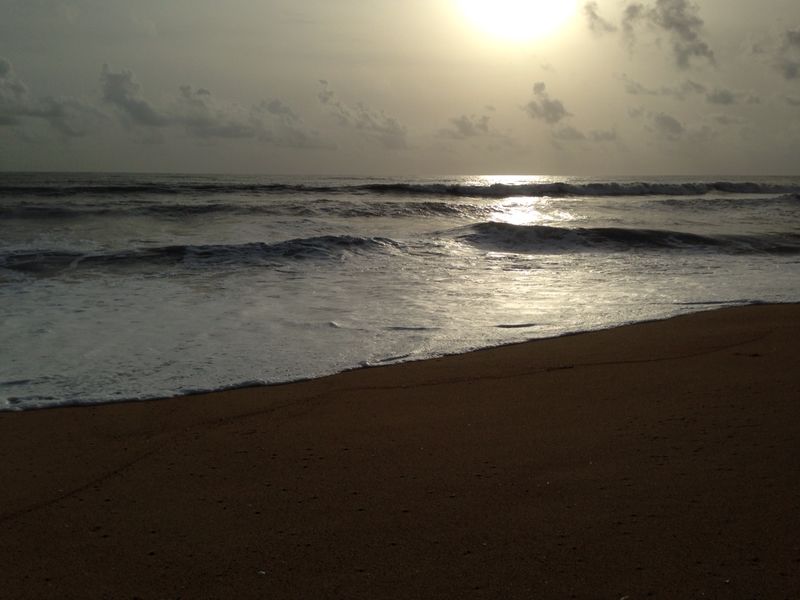 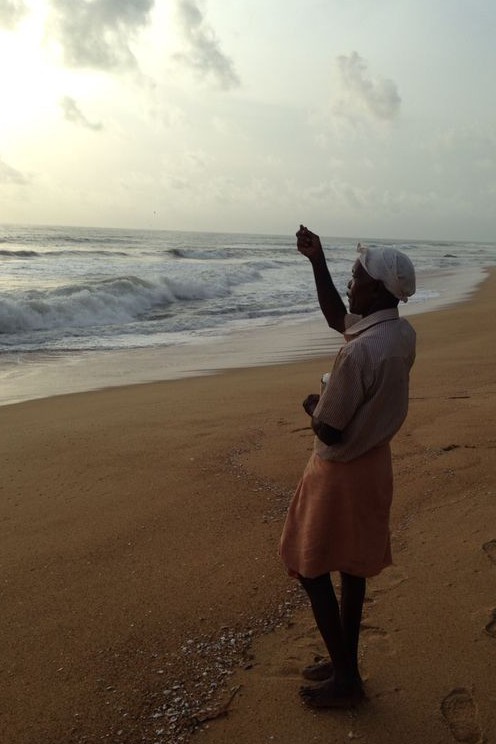 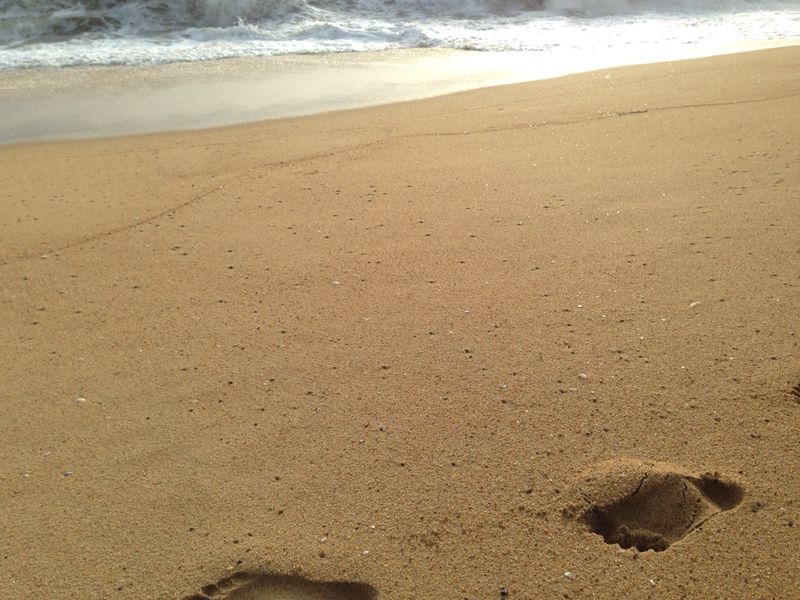 That evening we walked to the beach to watch the sunset. The sound of the surf had a strange calming effect on our senses as we held hands and walked to the edge of the sea from where we watched the sun disappear into the horizon, leaving us with sights of the most spectacular maze of orange hues in the expanse of the evening Kerala sky. In the distance we could see a local fisherman skilfully throw his line into the shallow lashing waves, hoping to catch his evening meal. Near us were footprints, but on this quiet secluded beach, we couldn’t see who had left them there and it reminded us of Mary Stevenson's immortal poem, ' Footprints in the sand.' 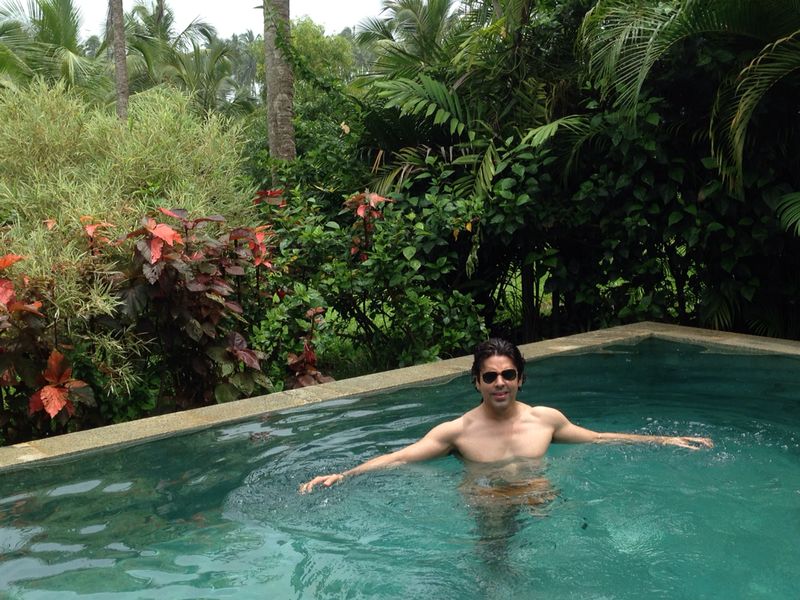 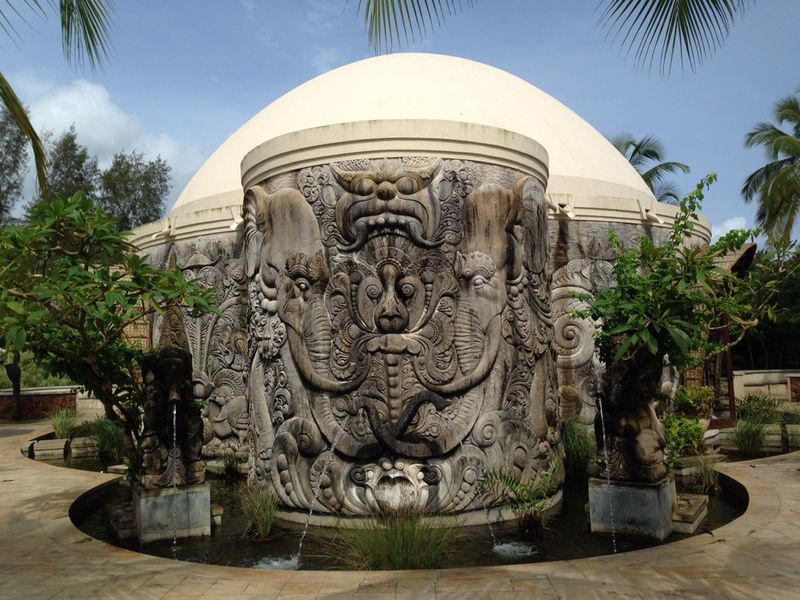 We returned to our villa and decided to dip into the pool before heading out for cocktails at the dome shaped hotel bar, Ivory, which is surrounded by a simple yet elegant water body. I have always loved that distinct sound of flowing water. It reminds me of the peacefulness of a hillside stream. And when you hear the fusion of running water mixed with the music of the waves of the arabian sea in the distance, with a glass of a perfectly chilled Chilean Cabernet franc in one hand and the hand of the love of your life in the other, you realise that this is indeed bliss.

For dinner that evening we were served a Karvapellai Cheeman with Prawn kappas and hot Idiyappams. We both agreed that the food in South India was flavourful and rich and we ate more than our fair share of the regional specials. 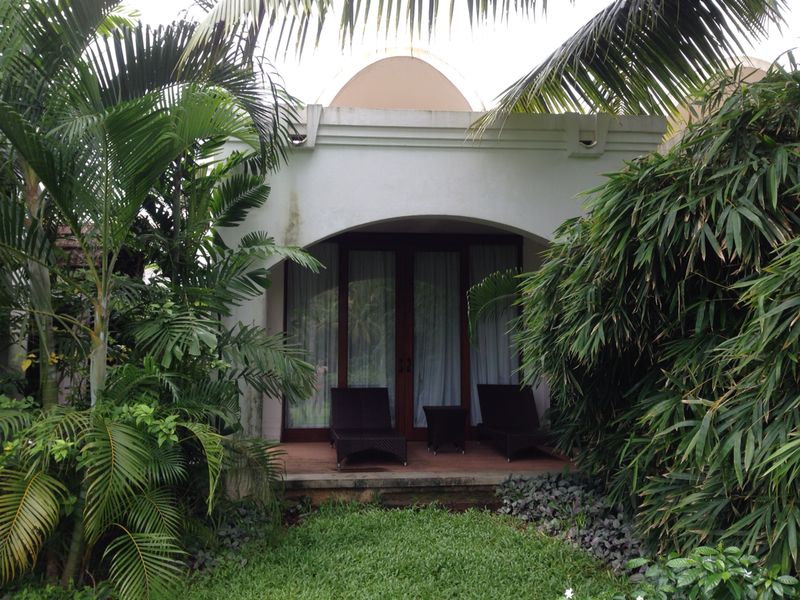 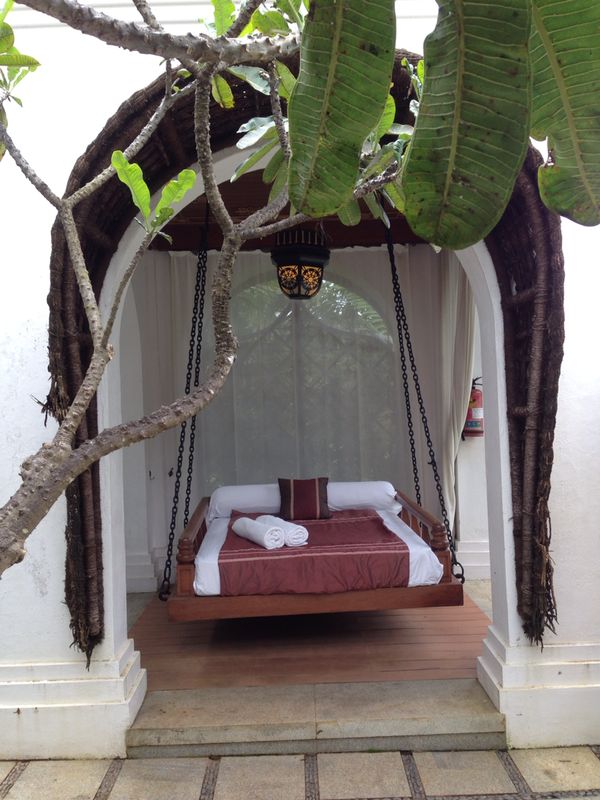 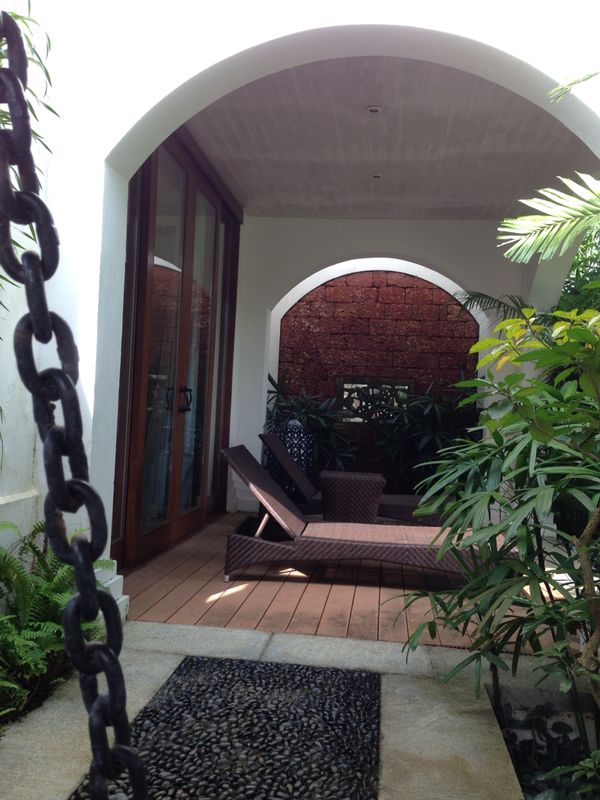 The next morning we were up bright and early. I chose to read my book on the swing bed by our private pool and embrace my surroundings before heading out to breakfast. Laveena was back in the water for her morning swim and stretch . Breakfast was a buffet. On account of the long weekend, the hotel was full. Breakfast was served at 'The Soiree'. We were told that due to the high occupancy, Latitude would not be able to accommodate the morning traffic and hence the shift. The spread at breakfast was satisfactory, however the experiment of the shift did appear to have it'a flaws with the serving staff flustered, as our coffee was served a full 20 minutes after we had ordered it and when it finally did come, it was cold. These are little irritants and the staff are indeed courteous, so one tends to overlook these minor slippages in the overall scheme of things. What I was unwilling to ignore were the first lot of soggy dosas i was served as I like them hot, brown and crisp. The red powder chutney, ‘podi’, recommended to us by Chef Mrinalini was an absolute winner though and this alone fired me up enough to devour four dosas that morning. No 3 and 4 were crispier and much hotter. 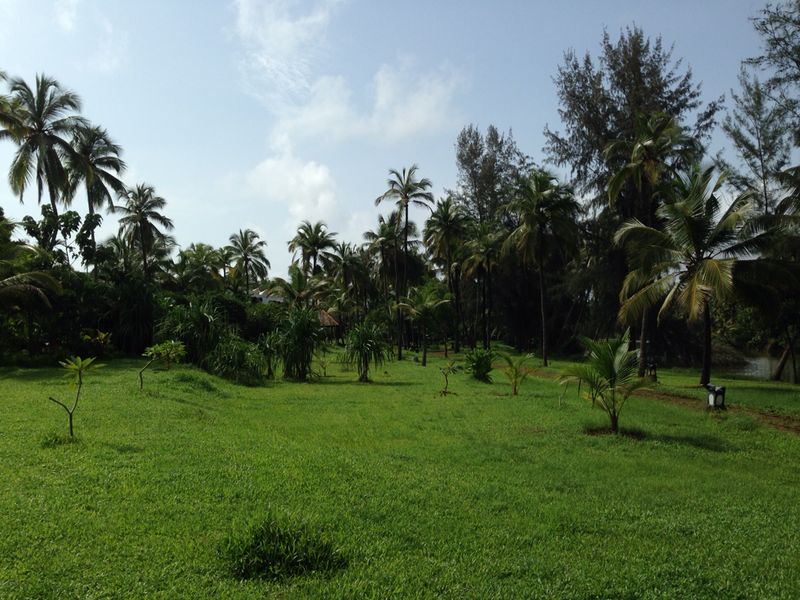 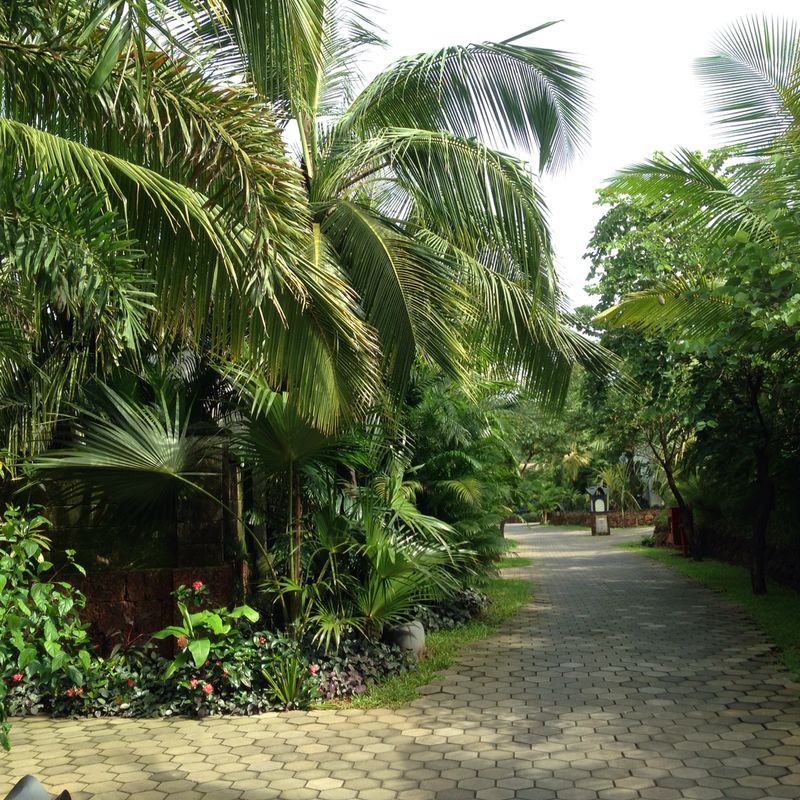 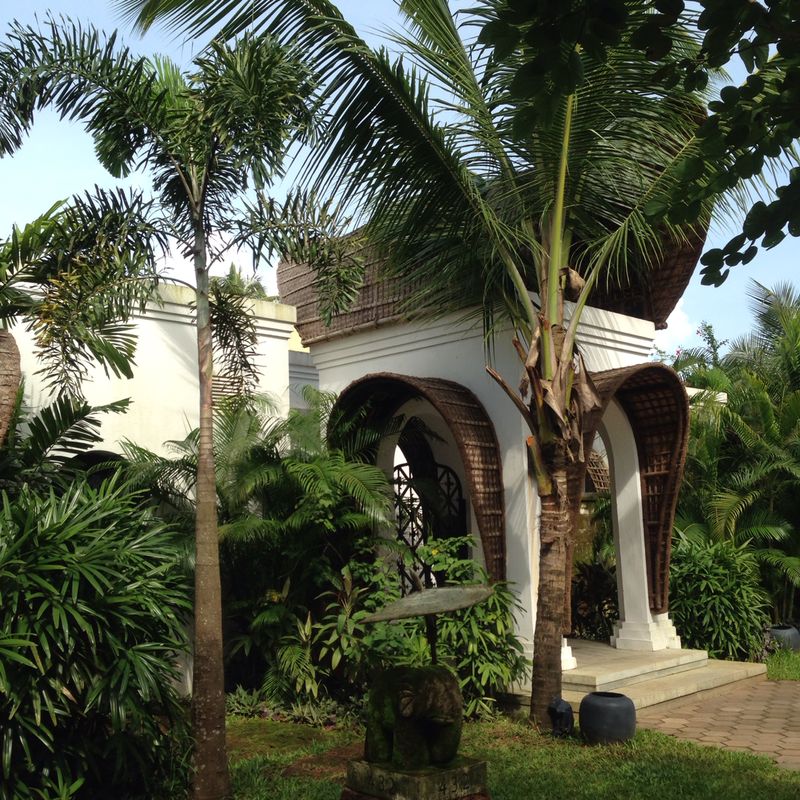 After a hearty breakfast, we needed to battle the calories. We returned to our villa, put on our walking shoes and decided to explore the diverse landscape spread across this lovely property. After a brief walk through the expanse of garden, we stumbled upon the Jiva Grande spa. It truly lives up to it’s name as this wellness and ayurvedic mecca is spread across a whopping 165,000 sq feet and boasts of treatments fit for royalty. With our breakfast digested, we decided to visit the gym for a quick workout following which we signed up for a bamboo rafting adventure on the River Kappill. Rod fishing is an option when you take the bamboo raft out, but we were told that as the water levels were comparatively low, we were unlikely to catch any fish unless we were willing to spend a few hours on the raft. We even had an option to take out our own Kayaks. 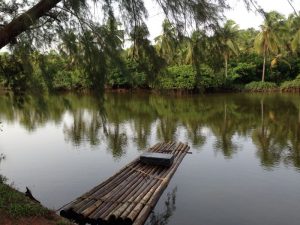 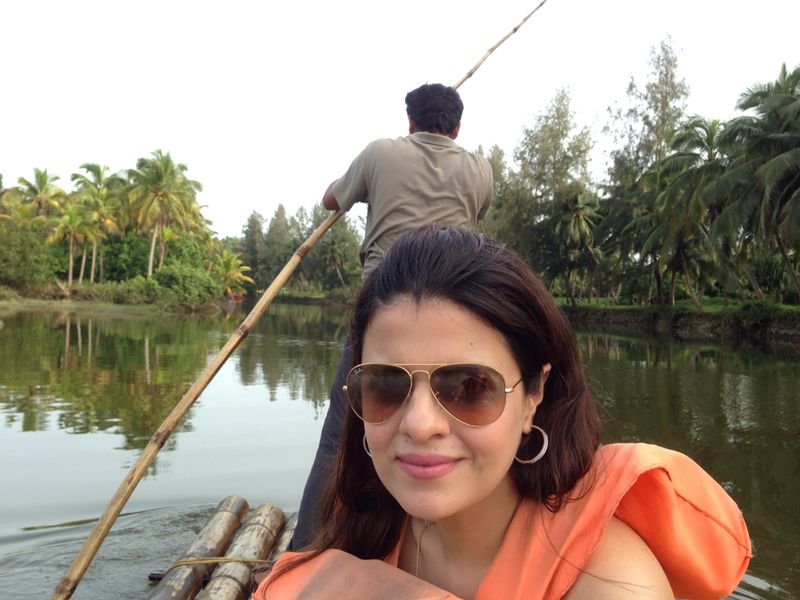 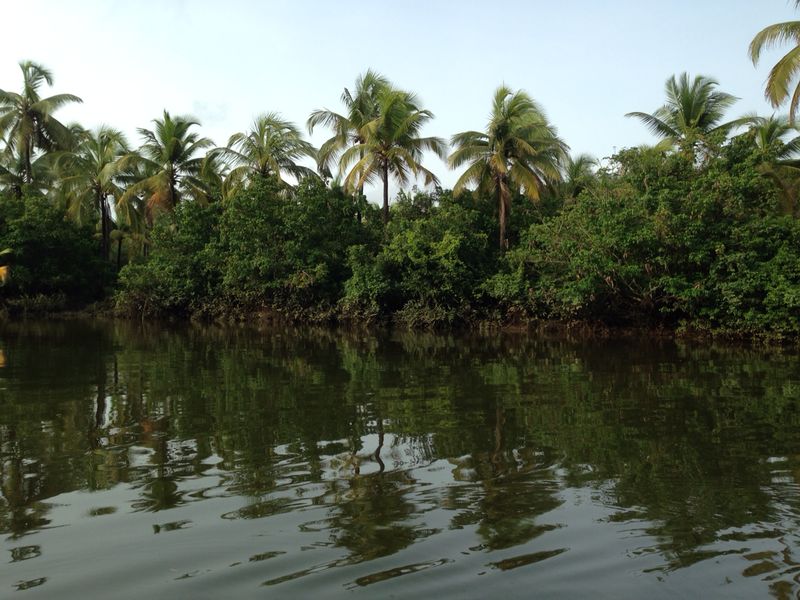 We chose a lazy bamboo raft ride along the river, as the boatman used a pole to steer us through the rain drenched murky and now still waters. Gliding majestically above us we spotted a Sea Eagle. People in north Malabar call it Mukorachan (forefather of fisherfolk). This simple rafting adventure was ever so relaxing and is highly recommended when one visits. However be prepared to get your feet wet and do not fret about the colour of the water as this is nature at it's best.

Cocktails that evening were hosted by Mr. Khanna, the GM. Over fine wine and delicious snacks, the conversation that evening was light and friendly and even Mr. Sachdev, the front office manager joined in for some very pleasant company. 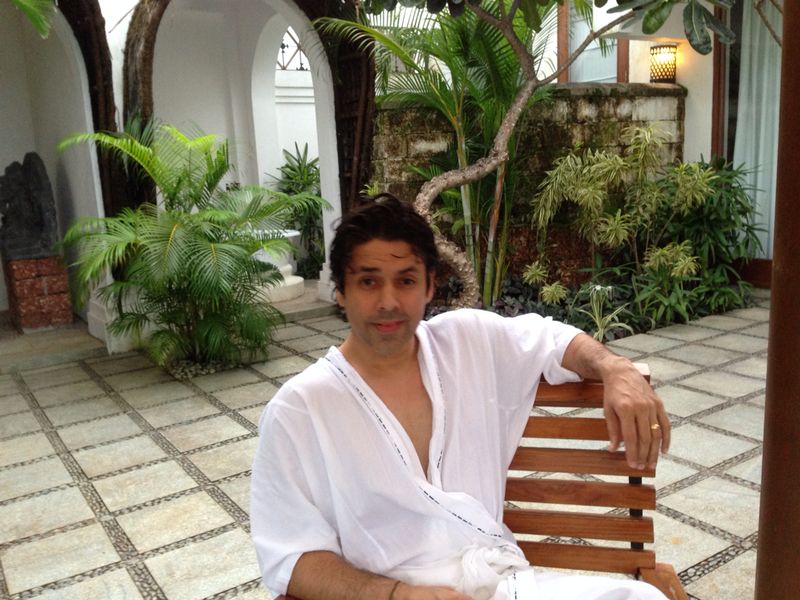 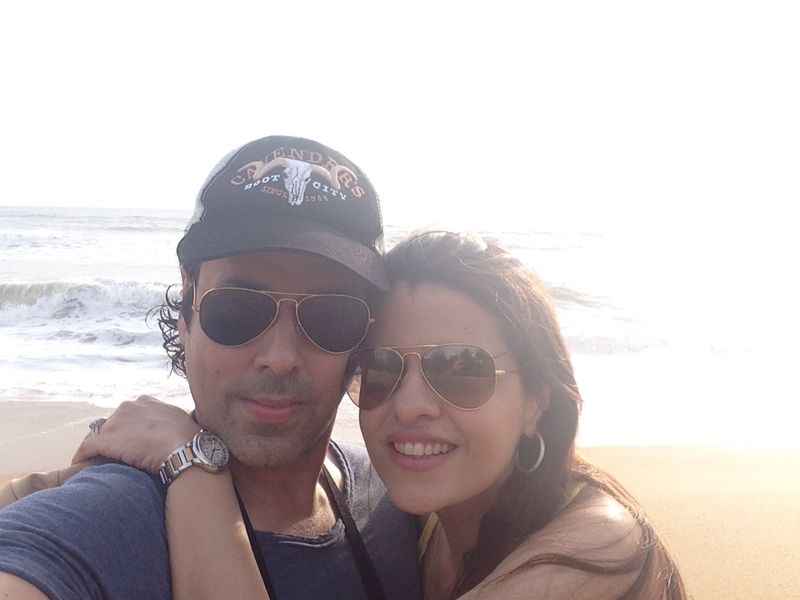 Over the next couple of days we spent our time between reading, swimming, eating and star gazing. The massages at the spa were fabulous while some of the dishes we enjoyed at the property included the Travancore fish curry, the Kozhi Chuttathu and the Mapilah kozhi roast. C.Tijo Thomas the Sous Chef is an artist when it comes to his South Indian dishes, as each one was enjoyed immensely.

Although a short break, given it's proximity from Mumbai, I would highly recommend this as a fabulous getaway, a great alternative for those city folks who for want of options, visit Goa again and yet again and again. If Kerala is God's own country then The Taj Vivanta Bekal is indeed where he comes to relax.

A walk in the Clouds

Razia Mitha. says :
Saj once again loved the article and felt I was with you on this fabulous getaway ! I must mention loved the last para .
Reply
Anand Kumar says :
Good blog. I feel Vivanta can still do better.
Reply
Darren says :
5 days may not suffice for seeing the whole of Kerala. Some places need two whole days to fully explore, Munnar is one of them I can remember.
Reply